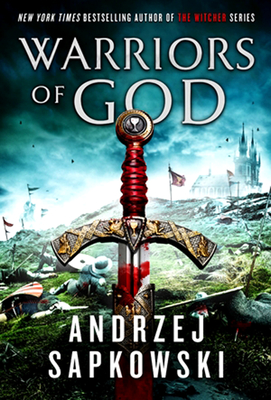 From the New York Times bestselling author of The Witcher: Reynevan—scoundrel, magician, possibly a fool—travels into the depths of war as he attempts to navigate the religious fervors of the fifteenth century.

When the Hussite leaders entrust Reynevan with a dangerous secret mission, he is forced to come out of hiding in Bohmeia and depart for Silesia. At the same time, he strives to avenge the death of his brother and discover the whereabouts of his beloved. Once again pursued by multiple enemies, he must contend with danger on every front.

Full of gripping action replete with twists and mysteries, seasoned with magic and Sapkowski's ever-present wit, fans of the Witcher will appreciate this rich historical epic set during the Hussite Wars.

Praise for the The Tower of Fools, book one of the Hussite Trilogy:
"This is historical fantasy done right." —Publishers Weekly (starred review)

“A fantastic novel that any fan of The Witcher will instantly appreciate.” —The Gamer

“A ripping yarn delivered with world-weary wit, bursting at the seams with sex, death, magic and madness.” —Joe Abercrombie

“Sapkowski's energetic and satirical prose as well as the unconventional setting makes this a highly enjoyable historical fantasy.” —Booklist

The Hussite Trilogy
The Tower of Fools
Warriors of God

The Malady and Other Stories: An Andrzej Sapkowski Sampler (e-only)

Andrzej Sapkowski was born in 1948 in Poland. He studied economy and business, but the success of his fantasy cycle about the Witcher Geralt of Rivia turned him into an international bestselling writer. Geralt’s story has inspired a hit Netflix show and video games, has been translated into thirty-seven languages, and has sold millions of copies worldwide.

"Sapkowski's love for the period is clear as he touches on notorious historical events and figures ... The carefully painted landscapes and intricate politics effortlessly draw readers into Reinmar's life and times. This is historical fantasy done right."—Publishers Weekly (starred review) on Tower of Fools

"A ripping yarn delivered with world-weary wit, bursting at the seams with sex, death, magic and madness."—Joe Abercrombie on Tower of Fools

"Sapkowski's energetic and satirical prose as well as the unconventional setting makes this a highly enjoyable historical fantasy. Recommended for Sapkowksi's many existing fans."—Booklist on Tower of Fools

"[The Tower of Fools] is a fantastic novel that any fan of The Witcher will instantly appreciate . . . Reynevan is an intelligent dope who follows his heart, his accompanying cast of characters is thoroughly developed and just as intriguing, and the worldbuilding employed by Sapkowski is impeccable."—The Gamer on Tower of Fools

“Sapkowski’s primary draw is his ability to weave rich historical context with a complex atmosphere of magic and superstition . . . [The Tower of Fools] is quite rewarding for readers ready to take the plunge.”—BookPage on Tower of Fools