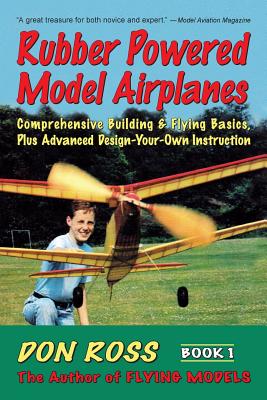 This comprehensive manual covers rubber powered model airplanes from a beginner's simple trainer through gradually more complex designs, including winning scale and duration fliers. Even if you've never built a model, the simple line drawings and detailed photos give you the tools and techniques to build light, sturdy models that will surprise and delight you with their sustained flights. Some Important Topics Covered Include... -Plans for two all-sheet balsa models that can be built in hours and are capable of flights exceeding one minute indoors or out. -Plans for stick and tissue models that gradually introduce the builder to more complex projects. -Many techniques that can be used to simplify construction, add strength, and reduce weight. -Propeller construction and design simplified so every novice can build and even design contest winning props. -The secrets of flight trimming as the experts do it. -Numerous ideas on how to add terrific scale details. -The ABC's of how to design your own models including Canards, Bi-planes, and Flying Wings. It's all here...the models, materials, and methods. Learn how to work with the various materials and adhesives and how to choose the right ones for every type of model. This book shows you the difference between kits and "scratch building," and how to modify any kit for better endurance and appearance. Don started building models in 1942. His designs have appeared in magazines and his "Fledgling" classes have added scores of young and "retread" modelers to the active scene. Don specializes in "synthesizing" difficult technical information into simple, straightforward how-to basics that make experts out of rank beginners. Rubber Powered Model Airplanes takes the "mystery" out of building successful free flight models. Whether you're thinking of building a kit, or considering an original design; whether you build for fun or competition...this book's for you "THE book I would recommend to anyone, of any age, starting out in free flight." -National Free Flight Digest "A tool to bring aeromodeling to the public." -Flying Models Magazine "Universal. Good value for the bookshelf." -Aero Modeller Magazine.

Don Ross, a private pilot and engineer, started building model airplanes in 1942 when he volunteered to help with the US Navy's "Spotter Model Program." The idea was to construct carefully carved solid pine models of enemy aircraft that were then painted black. After being checked for accuracy by a Navy representative who came to the schools, the models were sent to the Navy to be mounted in the wardrooms of Navy ships to help sailors and airmen quickly identify enemy aircraft. Don worked in the aircraft and instrument industries and eventually ran a company that made nameplates, dials, and other marked items for various industries. His business was known as a "short run" company, specializing in small orders needed in a hurry. Since he wrote all the job sheets for the shop, he became quite practiced at explaining complicated operations to a work force that spoke several languages. Don designed the rubber powered "Canarsie Canary" for beginners, of which thousands were built and successfully flown by rank beginners, and it became an immensely popular project for clubs and scout groups. A video titled "Silent Magic" shows how a group of 20 eleven-years-olds built and flew the "Canary" in a large indoor venue. Most of the models flew for 25-30 seconds, exciting spectators as well as the kids. In 2003 The National Free Flight Society chose the "Canary" as its "Beginner's Model of the Year." Don's "Fledgling" classes have added scores of young and "retread" modelers to the active scene. Don also wrote a column for Flying Models magazine for many years, and his designs have appeared in various magazines. He specializes in "synthesizing" difficult technical information into simple, straightforward how-to basics that make experts out of rank beginners.