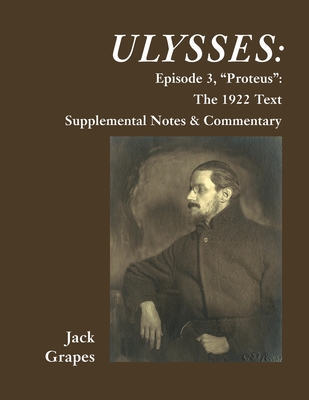 This workbook is a companion study guide to Grapes' Yes I Said Yes I Will Yes, which covers all 18 episodes of Ulysses, James Joyce's modernist novel rendered in the "stream of consciousness" technique. The most famous episode is Molly Bloom's "soliloquy" that ends the novel, but this workbook focuses on the most dense and difficult Episode #3, "Proteus," in which Stephen Dedalus strolls along Sandymount Strand thinking deep thoughts about thinking deeper thoughts, which include memories of Paris, his mother's dying, and the future he faces as a homeless artist. Hundreds of references flash through Stephen's consciousness as he observes cocklepickers on the beach, a ship's wreckage thrown up on the sand, a dog sniffing the body of a dead dog, and a pair of midwives carrying a bag stuffed with afterbirth. Grapes provides several short essays commenting on Ulysses, as well as copious notes on the references that stymie most first-time readers of the book. Also included are nearly 100 photos and graphics.