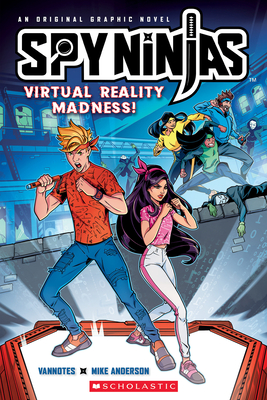 The Spy Ninjas are going viral in their first original graphic novel!The Spy Ninjas finally have the upper hand! Chad and Vy have discovered a super secret project Zorgo base. It's filled with gadgets, gizmos and some serious technology. Chad and Vy just have to show some of this to the other Spy Ninjas. They bring a VR headset home with them, but it's more than meets the eye. Chad and Vy try on the headset and get sucked into a virtual world! This can't be good. Complete with digital bosses, exploding food, and wacky characters, will the Spy Ninjas be able to escape or will project Zorgo prevail once and for all? This original graphic novel is perfect for readers searching for a whirlwind adventure!

Mike Anderson is a comic book artist from Oklahoma, where he lives with his wife, Heather, and three sons Colt, Koda, and Caden. Mike has done work for several indie and mainstream comic publishers, as well as illustration and animation work for many national brands. Born and raised on the ‘80s and ‘90s craze of Ninja Turtles, Mike was all too excited to work on the Spy Ninjas graphic novel. When he is not drawing comics, Mike enjoys playing with his kids, animating, and scarfing lots of pizza! You can find more of his work at MikeyComix.com.

Vannotes is a writer, cartoonist, and educator based out of Idaho. Their work includes the Spy Ninjas Official Graphic Novel Virtual Reality Madness! , Bendy: Crack-Up Comics Collection, and Piggy: Permanent Detention. They received their Bachelor of Fine Arts degree in Comic Art from the Minneapolis College of Art and Design and their Master of Fine Arts degree in Creative Writing from Eastern Oregon University. In their free time, they read way too many comics and play far too many video games.