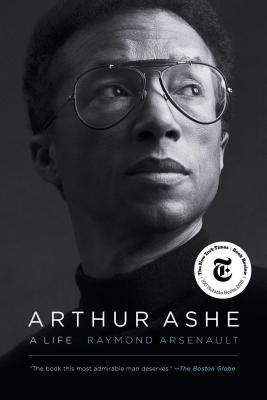 Born in Richmond, Virginia, in 1943, by the age of eleven, Arthur Ashe was one of the state’s most talented black tennis players. He became the first African American to play for the US Davis Cup team in 1963, and two years later he won the NCAA singles championship. In 1968, he rose to a number one national ranking. Turning professional in 1969, he soon became one of the world’s most successful tennis stars, winning the Australian Open in 1970 and Wimbledon in 1975. After retiring in 1980, he served four years as the US Davis Cup captain and was inducted into the International Tennis Hall of Fame in 1985.

In this “deep, detailed, thoughtful chronicle” (The New York Times Book Review), Raymond Arsenault chronicles Ashe’s rise to stardom on the court. But much of the book explores his off-court career as a human rights activist, philanthropist, broadcaster, writer, businessman, and celebrity. In the 1970s and 1980s, Ashe gained renown as an advocate for sportsmanship, education, racial equality, and the elimination of apartheid in South Africa. But from 1979 on, he was forced to deal with a serious heart condition that led to multiple surgeries and blood transfusions, one of which left him HIV-positive. After devoting the last ten months of his life to AIDS activism, Ashe died in February 1993 at the age of forty-nine, leaving an inspiring legacy of dignity, integrity, and active citizenship.

Based on prodigious research, including more than one hundred interviews, Arthur Ashe puts Ashe in the context of both his time and the long struggle of African-American athletes seeking equal opportunity and respect, and “will serve as the standard work on Ashe for some time” (Library Journal, starred review).

Raymond Arsenault is the John Hope Franklin Professor of Southern History at the University of South Florida, St. Petersburg. One of the nation’s leading civil rights historians, he is the author of several acclaimed and prize-winning books, including Freedom Riders: 1961 and the Struggle for Racial Justice and The Sound of Freedom: Marian Anderson, the Lincoln Memorial, and the Concert That Awakened America.

“For those who have long admired Ashe, this close look at his life offers even more evidence that he was more than a great player, he was an extraordinary person. . . . Arthur Ashe: A Life is among the best books about tennis I’ve ever read — it’s a deep, detailed, thoughtful chronicle of one of the country’s best and most important players.”
— Touré

“A thoroughly captivating biography. . . . With great dexterity, Arsenault juxtaposes Ashe’s tennis journey with touchstone moments of the ’60s. . . . As this book eloquently reveals, one can only wonder and shed at least one tear for what more [Ashe] might have accomplished.”
— Joel Drucker

“An insightful narrative of the evolution of a remarkable human being.”
— Michael Grunwald

"Finally a thorough and thoughtful biography of the committed activist and tennis champion. It’s the book this most admirable man deserves."
— Bill Littlefield

“An important interpretation of Ashe’s legacy and accomplishments, not just on the UCLA tennis courts but also with the deeds that defined him later.”
— Tom Hoffarth

"Raymond Arsenault's magisterial biography of Arthur Ashe reconstructs the life of a true gentleman and scholar-athlete, a champion on and off the court who became one of the most admirable figures in the history of sports."
— Ambassador Andrew Young

“Masterful. . . . Arsenault's effort to document Ashe's full life in one volume is commendable and will serve as the standard work on Ashe for some time.”
— Library Journal (starred review)

“No modern athlete, with the exception of Muhammad Ali, has altered our cultural and political landscape as fully as Arthur Ashe. . . . Rarely has the story of a life and its times been threaded together so elegantly.  A marvelous read.”
— David M. Oshinsky, Pulitzer Prize-winning author of Polio: An American Story

“This lovingly researched biography of Arthur Ashe is of such high quality that it deserves a place on the shelf alongside the highly-regarded works of Ashe himself.”
— Peter Bodo, ESPN Tennis

“Arthur Ashe – athlete and activist of international renown – has the biography and biographer he so richly earned.  The distinguished historian Raymond Arsenault illuminates an extraordinary life of courage, triumph, and heartbreak with riveting prose, deep understanding, and great sensitivity.”
— Steven Hahn, Pulitzer Prize-winning author of A Nation Under Our Feet: Black Political Struggles in the Rural South from Slavery to the Great Migration

“Arsenault’s Ashe is too large a character to be contained in a mere sport. . . . Ashe was always aware of his status as a trailblazer in the white world of tennis, an awareness that helped inform the dignity with which he famously carried himself as a player and as an outspoken black activist and public intellectual. Arsenault renders this aspect of the story exquisitely, moving smoothly between tennis and politics and Ashe’s ongoing efforts to determine and articulate his positions with respect to the important issues of his time.”
— Scott F. Parker

“An important interpretation of Ashe’s legacy and accomplishments, not just on the UCLA tennis courts but also with the deeds that defined him later.”
— Tom Hoffarth