Magic to Do: Pippin's Fantastic, Fraught Journey to Broadway and Beyond (Hardcover) 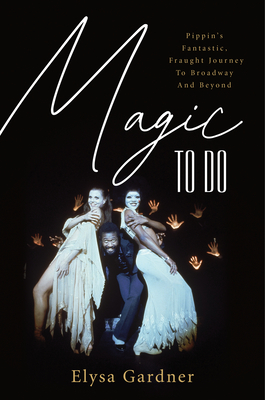 In Magic to Do, which celebrates the 50th anniversary of Pippin's opening, two-time Pulitzer Prize jury member Elysa Gardner turns her attention to this innovative show, the musical retelling of the story of Prince Pippin, son of Charlemagne, and his quest for an "extraordinary life." Magic to Do dives deep into the legendary clashes, backstage drama, and incredible artistic synergy that produced one of Broadway's most influential musicals, a show that paved the way for the pop-informed musicals that we know and love today. Full of big personalities, brilliant creative minds, and never-before-told stories, Magic to Do is an intimate look at a moment in history, a time and a place in which popular culture was as defined by conflict--between the young and the old, idealism and cynicism, creation and destruction--as anything else. Gardner draws out this friction through her examination of the creative struggles between Pippin's director/choreographer, the iconic Bob Fosse, for whom the show would mark a massive career resurgence, and its young composer/lyricist, Stephen Schwartz (of Wicked fame), who was making his Broadway debut. Magic to Do, named for the opening song of the musical, clearly marks the lasting cultural significance of Pippin, which derives in large part from the timelessness of the search for self, one that presents itself anew to each succeeding generation, accounting for the show's enduring popularity around the world. Infused with R&B sounds and a universal message, it is fair to say that, without Pippin, there is no Spring Awakening, Dear Evan Hansen, or even Hamilton.

Elysa Gardner has written about theater and music for The New York Times, The Los Angeles Times, The New Yorker, The Village Voice, Town & Country, Rolling Stone, Entertainment Weekly, Time Out New York and USA Today, among other publications, and has been a contributor to VH1 and NPR. She is a theater critic for The New York Sun and New York Stage Review and hosts the podcast "Stage Door Sessions" for Broadway Direct. Book contributions include the introduction to U2: The Rolling Stone Files and a chapter on Taylor Swift for Woman Walk the Line: How the Women in Country Music Changed Our Lives. Elysa is a board member of the Drama Desk and has served on the drama jury for the Pulitzer Prize twice, most recently as chair. She lives in New York City with her husband, daughter, and dog.