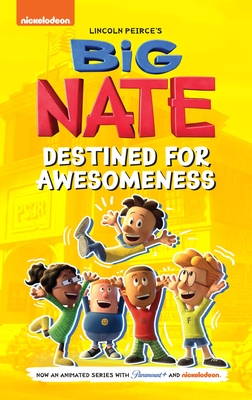 Sixth-grader Nate Wright believes he is AWESOME. At least that’s what he’ll tell you. Truth is, he has his doubts. But he’s not about to let the rest of the world know that. Instead, Nate finds himself constantly trying to prove how great he is to everyone around him. But there are many bumps on the road to Awesomeness, from his annoying sister, to his academic arch-nemesis, to his pure evil social studies teacher.

Luckily, Nate is able to express himself through the world of cartoons that he creates. Cartoons are his super power. They express the way he feels and bring his overactive imagination to life. On the outside, Nate seems confident and sure of what he is doing, but his cartoons reveal who he truly is: a little uncertain, but very funny and always entertaining. Charming, mischievous, and a magnet for misadventure—trouble is always fun when Nate is around. Just ask his friends!

Big Nate: Destined for Awesomeness includes stories from three episodes of the new animated series on Paramount+ and Nickelodeon. In "The Legend of the Gunting," Nate finds himself only one detention away from disappearance, according to an ominous P.S. 38 legend. In "Go Nate, It's Your Birthday," Nate's use of his father's credit card leads to all kinds of great adventures—and an epic race to recover from disaster. And in "CATastrophe," Nate finally gets a chance to spend time with his imagined true love, Jenny, only to wind up terrified of her pet.

Featuring dazzling art from the TV series and all the charming characters of Lincoln Peirce's bestselling books, this new graphic novel series will delight both new and longtime fans of Big Nate.

Lincoln Peirce has been drawing the Big Nate comic strip for more than 20 years. Born in Ames, Iowa, Peirce grew up in Durham, New Hampshire. As a kid, he began creating his own strips in the sixth grade. Peirce taught high school in New York City and has created several animated pilots for Cartoon Network and Nickelodeon. He lives in Portland, Maine, with his family.