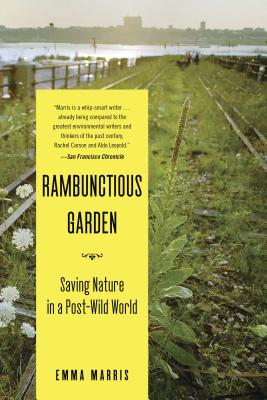 “Remarkable . . . Emma Marris explores a paradox that is increasingly vexing the science of ecology, namely that the only way to have a pristine wilderness is to manage it intensively.” -The Wall Street Journal

A paradigm shift is roiling the environmental world. For decades people have unquestioningly accepted the idea that our goal is to preserve nature in its pristine, pre-human state. But many scientists have come to see this as an outdated dream that thwarts bold new plans to save the environment and prevents us from having a fuller relationship with nature. Humans have changed the landscapes they inhabit since prehistory, and climate change means even the remotest places now bear the fingerprints of humanity. Emma Marris argues convincingly that it is time to look forward and create the "rambunctious garden," a hybrid of wild nature and human management.

Rambunctious Garden is short on gloom and long on interesting theories and fascinating narratives, all of which bring home the idea that we must give up our romantic notions of pristine wilderness and replace them with the concept of a global, half-wild rambunctious garden planet, tended by us.

Emma Marris is an award-winning journalist whose writing on science and the environment has appeared in the New York Times, the Atlantic, National Geographic, Wired, Outside, High Country News, and many other publications, including Best American Science and Nature Writing. Her previous book, Rambunctious Garden, was the subject of her TED Talk, which has over 1.4 million views. She was also featured on the TED Radio Hour and the series Adam Ruins Everything. She is based in Klamath Falls, Oregon.

"In her remarkable new book The Rambunctious Garden, Emma Marris explores a paradox that is increasingly vexing the science of ecology, namely that the only way to have a pristine wilderness is to manage it intensively." - Wall Street Journal

" Potentially the most optimistic and controversial work about the future of nature to appear in years." - Grist.org

"Ms Marris's book is an insightful analysis of the thinking that informs nature conservation." - The Economist

"What may be the most important book about the environment in a generation." - Idaho Statesman

"Marris is a whip-smart writer . . . already being compared to the greatest environmental writers and thinkers of the past century, Rachel Carson and Aldo Leopold." - San Francisco Chronicle