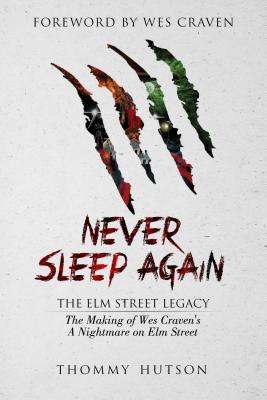 The definitive chronicle of the making of Wes Craven's 1984 classic horror film.

Never Sleep Again is the ultimate chronicle of one of the most important horror films of the 20th century. Hutson takes fans deeper into the movie’s boiler room than they’ve ever dared go, from exploring what spurred mastermind Craven to craft his watershed film to the beginnings of Robert Shaye’s revolutionary New Line Cinema. Never Sleep Again features dozens of exclusive cast and crew interviews, in addition to thoughts from those who worked with Craven and Shaye prior to their Nightmare.

This extensively researched, comprehensive look back is the definitive account of the film that began what many have called the best, most frightening and imaginative horror franchise in motion picture history.

Thommy Hutson is an award-winning screenwriter, producer, and author who wrote and produced critically acclaimed genre retrospectives on Scream, A Nightmare on Elm Street, Friday the 13th, and The Return of the Living Dead. Born and raised in New York he now resides in the mountains of Southern California with his husband and their cat. Learn more at hutsonranchmedia.com and follow him on Twitter: @HutsonRanch.

"...the ultimate dream and/or nightmare for Freddy Krueger fans."
— Entertainment Weekly “Must” List

"Meticulously researched and marvelously entertaining, Never Sleep Again: The Elm Street Legacy is a brilliant portrait of low-budget filmmaking in the early 1980s as told by the people who put their dreams and fates on the line to create a modern horror classic."
— Dread Central

“Author Thommy Hutson has crafted an astoundingly comprehensive look at one of the greatest horror films of all time. Never Sleep Again is a book so thorough, even the most hardcore Elm Street and horror movie fan will be surprised at what they read. Leaving no stone unturned in the completeness of this making of story, Hutson has truly created a dream for every Nightmare aficionado.”
— Bloody Disgusting

“Author Thommy Hutson has given a Masterpiece Theater treatment to a project that, at first, may not seem deserving. But once you dig into this tome you'll realize just how rich the subject matter is and why he has put together such a glorious tribute.”
— Del Howison, Bram Stoker Award-winning editor and owner of Dark Delicacies