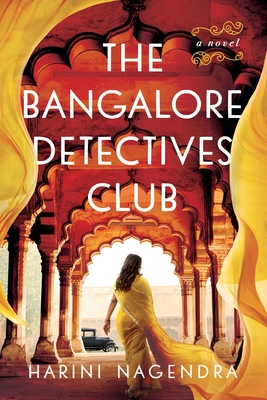 By Harini Nagendra
Email or call for price.

A New York Times Notable Book of the Year

The first in a charming, joyful crime series set in 1920s Bangalore, featuring sari-wearing detective Kaveri and her husband Ramu. Perfect for fans of Alexander McCall Smith’s The No. 1 Ladies Detective Agency.

When clever, headstrong Kaveri moves to Bangalore to marry handsome young doctor Ramu, she's resigned herself to a quiet life.

But that all changes the night of the party at the Century Club, where she escapes to the garden for some peace and quiet—and instead spots an uninvited guest in the shadows. Half an hour later, the party turns into a murder scene.

When a vulnerable woman is connected to the crime, Kaveri becomes determined to save her and launches a private investigation to find the killer, tracing his steps from an illustrious brothel to an Englishman's mansion. She soon finds that sleuthing in a sari isn't as hard as it seems when you have a talent for mathematics, a head for logic, and a doctor for a husband . . .

And she's going to need them all as the case leads her deeper into a hotbed of danger, sedition, and intrigue in Bangalore's darkest alleyways.

Harini Nagendra is a Professor of Sustainability at Azim Premji University, Bangalore, India, and the author of Nature in the City: Bengaluru in the Past, Present and Future. She received a 2013 Elinor Ostrom Senior Scholar Award and a 2007 Cozzarelli Prize with Elinor Ostrom from the Proceedings of the US National Academy of Sciences for research on sustainability. The Bangalore Detectives Club, the first book in the Detective Kaveri mysteries, is her first novel. She lives in Bangalore.

"The first in an effervescent new mystery series by the ecology professor Harini Nagendra, The Bangalore Detectives Club turns the clock back a century. This is a treat for historical mystery lovers looking for a new series to savor (or devour)."
— Sarah Weinman

"Women have made serious inroads with historical mysteries, and the Bangalore Detectives Club is a perfect example. Authored by an Indian professor of ecology, the story is rich with the sights, sounds, tastes, and politics of southern India in the 1920s under British Colonial rule. One of the book’s strengths is how the heavier themes are balanced by the sweetness of the relationship between Kaveri and her husband."
— Oprah Daily

"Set in colonial India in 1921, this debut mystery, the first in a projected series, makes full use of the oppressive British rule of the time, matched by the oppressive treatment of women, to highlight the ingenuity and bravery of a young woman determined to solve a murder. Nagendra's evocation of setting is riveting, and her use of colonial history is thoroughly fascinating, with devastating depictions of the airy condescension of the British. A fine start to a promising series."
— Booklist (starred)

"Nagendra (Cities and Canopies: Trees in Indian Cities) makes her fiction debut with an exceptional series launch. By placing her intelligent and clear-eyed protagonists in the multilayered and multicultural milieu of colonial India, Nagendra, a university professor in Bangalore, imbues this mystery with a rich, edifying, and authentic feel. Readers will hope Kaveri and Ramu will be back soon."
— Publishers Weekly (starred)

"For historical mystery and cozy mystery fans, armchair travel to 1920s Bangalore, where newly married Kaveri ends up at a party that instead turns into a murder mystery. Soon she’s investigating the case herself using her logical brain, talent for mathematics, and the medical expertise of her husband."
— Book Riot, "The Best Mystery, Thriller and True Crime Books Out in May"

"Told with real warmth and wit, in The Bangalore Detective Club, Harini Nagendra has created an intricate and fiendish mystery with a wonderful duo of amateur sleuths Kaveri and Ramu at its heart, and capturing the atmosphere and intensity of Bangalore in the roaring twenties. I can’t wait for the next installment. A perfect read for fans of Alexander McCall Smith and Vaseem Khan."
— Abir Mukherjee, award-winning author of The Shadows of Men

“A classic whodunnit with the added appeal of a female sleuth in colonial India. For the Western reader, a fascinating glimpse into customs and a mindset very different from our own.”
— Rhys Bowen, New York Times bestselling author

"Nagendra’s fiction debut is an excellent series starter, set in 1920s Bangalore. Kaveri, newly wed to handsome doctor Ramu, and biding her time until she can return to the study of mathematics, accidentally witnesses a murder at a social event and uses her skills to try to identify the killer with Ramu assisting. In a layered and well-nuanced show-don’t-tell writing style, Nagendra skillfully contrasts India’s burgeoning national independence movement with the more constrained situation of its women, especially those at the bottom of the caste system. Kaveri and Ramu—despite being novice sleuths—make a great pair in this atmospheric and charming mystery."
— Vannessa Cronin, Amazon Editor

"From page one we plunge into the exuberant cacophony of 1920s Bangalore, right there beside Kaveri Murthy in her adopted city: the drawing-rooms and dirt lanes, the gardens and brothels, the temples and jails. Nagendra's depiction of an awkward but tender new marriage is a delight, and who couldn't help but cheer for Kaveri as she swims in her sari, studies in secret, and commits herself to the pursuit of justice?”
— Catriona McPherson, author of The Mirror Dance

"I absolutely adored The Bangalore Detectives Club, a beautifully painted picture of a woman's life in 1920s India. Kaveri is a compelling character, headstrong, clever and dogged, and not at all deterred by the constraints of her position and gender. A fantastic book."
— M. W. Craven, award-winning author of The Curator