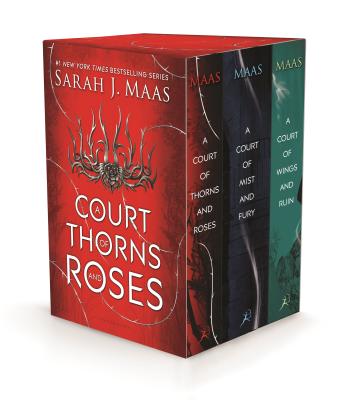 Discover the #1 New York Times bestselling A Court of Thorns and Roses series in this gorgeous box set.

When nineteen-year-old huntress Feyre kills a wolf in the woods, a beast-like creature arrives to demand retribution for it. Dragged to a treacherous magical land she only knows about from legends, Feyre discovers that her captor is not an animal, but Tamlin--one of the lethal, immortal faeries who once ruled their world.

As she dwells on his estate, her feelings for Tamlin transform from icy hostility into a fiery passion that burns through every lie and warning she's been told about the beautiful, dangerous world of the Fae. But an ancient, wicked shadow over the faerie lands is growing, and Feyre must find a way to stop it . . . or doom Tamlin--and his world--forever.

This box set of the #1 New York Times bestselling series contains hardcover editions of the first three books: A Court of Thorns and Roses, A Court of Mist and Fury, and A Court of Wings and Ruin.

Sarah J. Maas is the #1 New York Times and internationally bestselling author of the Throne of Glass, Court of Thorns and Roses, and Crescent City series. Her books have sold more than nine million copies and are published in thirty-seven languages. A New York native, Sarah lives in Pennsylvania with her husband, son, and dog.

"A thrilling game changer that's fiercely romantic, irresistibly sexy and hypnotically magical. . . . A flawless sequel that will once again leave us desperately clamoring for more, more, more." —USA Today on A COURT OF MIST AND FURY

"[T]he world is exquisitely crafted, the large cast of secondary characters fleshed out, the action intense, and the twist ending surprising, heartrending, and, as always, sure to guarantee readers' return. . . . When has Maas not churned out a best-seller? Her ongoing Throne of Glass series is enormously popular, and this sequel in an equally devoured new series is primed for similar success." —Booklist on A COURT OF MIST AND FURY

"An immersive, satisfying read." —Publishers Weekly on A COURT OF MIST AND FURY

"Hits the spot for fans of dark, lush, sexy fantasy." —Kirkus Reviews on A COURT OF MIST AND FURY

"Suspense, romance, intrigue and action. This is not a book to be missed!" —Huffington Post on A COURT OF THORNS AND ROSES

"Simply dazzles. . . . the clamor for a sequel will be deafening." —starred review, Booklist on A COURT OF THORNS AND ROSES