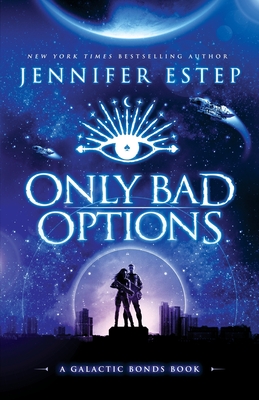 New York Times bestselling author Jennifer Estep blasts off with an exciting new science-fiction fantasy adventure with a dash of Regency romance. This action-packed space opera features a mix of magic and technology, along with a soul mates and enemies-to-lovers story. Perfect for fans of Star Wars, Bridgerton, and Pride and Prejudice.

Few people know the name Vesper Quill. To most folks, I'm just a lowly lab rat who designs brewmakers and other household appliances in the research and development lab at the powerful Kent Corp. But when I point out a design flaw and a safety hazard in the new line of Kent Corp spaceships, everyone knows who I am-and wants to eliminate me.

I might be a seer with a photographic memory, but I don't see the trouble headed my way until it's too late. Suddenly, I'm surrounded by enemies and fighting for my life.

I don't think things can get any worse until I meet Kyrion Caldaren, an arrogant Regal lord who insists that we have a connection, one that could be the death of us both.

The name Kyrion Caldaren strikes fear in the hearts of people across the Archipelago Galaxy. As the leader of the Arrows, the Imperium's elite fighting force, I'm used to being a villain, as well as the personal assassin of Lord Callus Holloway. Even the wealthy Regals who live on the planet of Corios are afraid of me.

But everything changes when I meet Vesper Quill. I might be a powerful psion with telepathic, telekinetic, and other abilities, but Vesper sees far too many of my secrets.

Thanks to an arcane, unwanted quirk of psionic magic, the two of us are forced to work together to unravel a dangerous conspiracy and outwit the dangerous enemies who want to bend us to their will.

Jennifer Estep is a New York Times, USA Today, and internationally bestselling author prowling the streets of her imagination in search of her next fantasy idea. Jennifer is the author of the Galactic Bonds, Section 47, Elemental Assassin, Crown of Shards, Gargoyle Queen, and other fantasy series. She has written more than 40 books, along with numerous novellas and stories. In her spare time, Jennifer enjoys hanging out with friends and family, doing yoga, and reading fantasy and romance books. She also watches way too much TV and loves all things related to superheroes. For more information on Jennifer and her books, visit www.jenniferestep.com or follow Jennifer on Facebook, Instagram, Goodreads, Amazon, BookBub, and Twitter. You can also sign up for her newsletter.