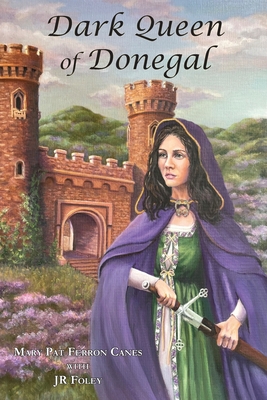 Emerging out of the Gaelic past, a remarkable woman, Ineen Dubh, walks and rides across the pages of Mary Pat Ferron Canes' and JR Foley's historical novel as bravely and as tangibly as her historical counterpart. Breaking the constrictions of a woman's role in the 16th Century, this Dark Queen of Donegal moves through this Irish historical fiction like a tempest. This "Dark Queen" foreshadows powerful changes in Ireland toward independence and in the rise of feminism that would take place a few hundred years after Ineen's rebellion. The authors recreate this 16th Century adventure on the Emerald Isle with passion and action.

Meticulously researched with personal insight from oral histories of Irish Clans and the author's grandmother and others, Dark Queen of Donegal is a story of honor and betrayals, kidnappings, imprisonment, and assassinations in Ireland, Scotland, and England. The book offers a front-row seat to an accurate, and, sometimes anguished, tale of rulers and warriors. Readers will feel what it was like to be amongst these rulers and warriors, learn of their courage, love, hatreds, and conquests. Readers will gain an understanding of the Dark Queen and her famous, heroic son Red Hugh. This book is a highly readable contribution to a view of history and to revelations about a powerful, tenacious real woman leader.

Ineen is married to an Irish "king" when her Scots relatives are slaughtered not far from Donegal's southern border. Elizabeth I despises the Queen of Donegal and orders the Crown to kidnap that Queen's 14-year-old son. The plot succeeds. Ineen believes an ancient Irish prophecy that her son, the Irish hero Red Hugh, is destined to succeed his father, and save the kingdom. She will do anything to rescue her son and alter the course of Donegal Castle's history.