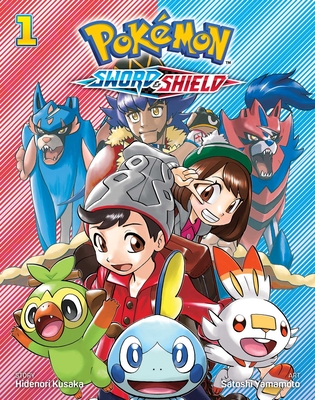 Casey Shield, a hacker who invented the Dynamax Simulator, and Henry Sword, a boy who repairs gear for Pokémon, both dream of entering the Galar region’s gym battles. For Casey, it’s a chance to reunite with her lost Pokémon. For Henry, it’s an opportunity to search for the legendary Rusted Sword and Rusted Shield.

Casey and Henry can’t enter Galar region tournaments without the support of the local champion, Leon! But with train disruptions, Team Yell and wild Dynamax Pokémon getting in their way, will they ever get a chance to impress him?!

Who’s going to get these wandering Wooloo off the train tracks?

Hidenori Kusaka is the writer for Pokémon Adventures. Running continuously for over 20 years, Pokémon Adventures is the only manga series to completely cover all the Pokémon games and has become one of the most popular series of all time. In addition to writing manga, he also edits children’s books and plans mixed-media projects for Shogakukan’s children’s magazines. He uses the Pokémon Electrode as his author portrait.

Satoshi Yamamoto is the artist for Pokémon Adventures, which he began working on in 2001, starting with volume 10. Yamamoto launched his manga career in 1993 with the horror-action title Kimen Senshi, which ran in Shogakukan’s Weekly Shonen Sunday magazine, followed by the series Kaze no Denshosha. Yamamoto’s favorite manga creators/artists include FUJIKO F FUJIO (Doraemon), Yukinobu Hoshino (2001 Nights) and Katsuhiro Otomo (Akira). He loves films, monsters, detective novels and punk rock music. He uses the Pokémon Swalot as his artist portrait.